I had an unusual request from Don Bales, Senior Extension Associate in Forestry.  He sent a photo of a double pecan nut (see photo below) and asked me what caused it.  I didn’t know for sure, so I sent the photo around to several pecan experts — most didn’t know either.  One who did was Dr. Bruce Wood at USDA-ARS in Byron, GA.  He explained it this way:

“…we occasionally see such nuts. As I recall, this form tends to be more common on certain varieties than others. It appears likely that the nut contains two distinct fertilized embryos—i.e., like non-identical twins in animals. The nut specimen you have is probably more rare than the multi cotyledon nuts often seen from ‘Mahan’ or its offspring (such multi-cotyledon nuts can arise from an extra division of the endosperm, thus producing 4 instead of 2 cotyledons, with 3 cotyledons occurring when the 4th one ceased developing soon after cell division). This nut appears to have been caused by a relatively rare event occurring very early during the development of the female ovary, when the initial female megasporocyte began the process of division preceding production of the usual 4 megaspores as a prerequisite to producing the embryo sac (with 3 of these megaspores degenerating into a degenerated megaspore portion of a single cell) with 1 cell possessing a nucleus that ends up being the embryo sac after a second cycle of meiosis. In other words, an early stage megasporocyte ‘divided an extra time’ to result in downstream production of 2 ovaries within the same pecan female flower. Thus, when the flower was pollinated by many different pollen grains, the pollen germ tubes grew down the style of the female flower, probably following a boron or hormonal concentration gradient, and entered the embryonic sac where both the vegetative nucleus and the sperm nucleus produced within the pollen tube of the pollen parent are discharged into the embryo sac where there are 2 awaiting female nucleoli. Merging of the sperm nucleoli with the egg nucleoli produces the diploid zygote (2n, 1 set of chromosomes from female parent and 1 set from the male parent) that becomes the zygotic embryo and later a new pecan tree. Merging of the other pollen grain nucleoli with the second female egg nucleoli within the embryo sac becomes the endosperm (triploid, or 3n, or 2 sets of chromosome from the female parent and 1 set from the male parent) of the seed (i.e., later producing the liquid endosperm which then later develops into the 2 lobes of the cotyledons we call the kernel). Note that typically each embryo sac contains 8 megaspores, but only one of them ends up becoming the zygote (fertilized gamete) and another being the endosperm (cotyledon). So, in the case of your abnormal nut, 2 embryo sacs were produced instead of the usual single sac, and there was fertilization of the egg within each embryo sac by two different pollen grains (possibly 2 different male parents), resulting in paternal twins. This means that the seed most likely has one side being from pollen source ‘A’ and the other side potentially being from pollen source ‘B’ (perhaps 2 different trees of the same pollinating cultivar; or alternatively, from 2 different pollen producing cultivars).”

Got that?  The photo is below: 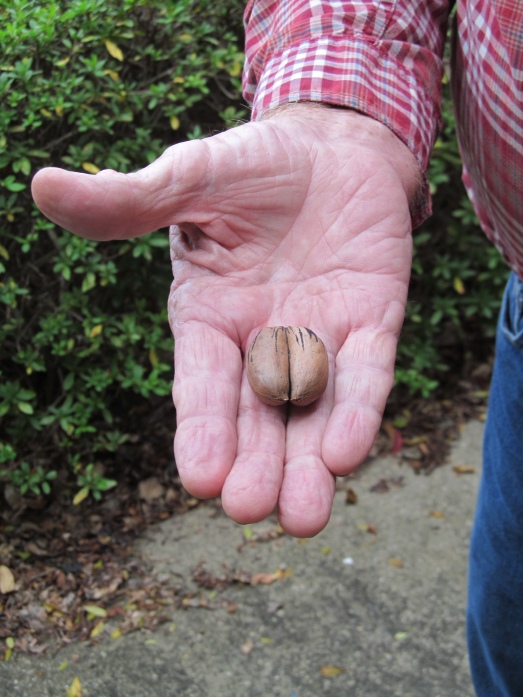 SEARCH FOR ANY TOPIC HERE